By Florida FFAOctober 23, 2015No Comments

When it was first suggested that we take a picture on top of the grain elevator I thought it was some sort of joke. Merely considering standing that high up in the air without anything securing me to the rails had my heart racing. Even more so, there was no way that the spindly steel structure connecting one silo to another, meant only for transporting corn, was capable of supporting the weight of seven people. But sure enough – we found ourselves standing at the foot of a winding metal staircase.

Last month, the state officer team had the opportunity to partake in Florida’s yearly Iowa Agriculture Experience. This trip, made possible by the Iowa Pork Producers Association, gives us the chance to see American agriculture in a whole new light. Iowa agriculture is less diverse than agriculture in Florida, as Iowa’s main focus is corn and soybean production, used to feed market hogs. What Iowa may lack in variety however, it makes up for in magnitude. Iowa leads the nation in hog production, raising over twenty million head each year. But all of that pork can’t be consumed here, which makes it easy to believe that Iowa exported more than ten billion dollars worth of agricultural products in 2013. Witnessing production on this scale helped me to see how exactly United States agriculture really does feed the world.

My knuckles turned white from tightly gripping the handrail as we made our way up a seemingly endless flight of stairs. Eventually, after climbing for what seemed like an eternity, I set foot on the final step. We had made it to the top, but now it was time to venture out on the platform connecting one silo to another. Trying not to shake the narrow metal path, we shuffled out on the walkway. Once we reached the center where we gathered for a picture I was struck by the landscape we were now looking out over. Laid out before us were thousands of acres of corn, spanning much more land than I could see. I remembered a conversation I had shared with the owner of this particular farm, Mr. Denny Gienger, earlier that day. He had told me that he farmed roughly two thousand acres. At the time of our conversation, two thousand was just a number to me. But now, standing several stories up, I suddenly realized how vast the land he managed was. Before, what had been just a statistic was now tangible, and I finally understood how massive not only this farm was, but our entire industry. 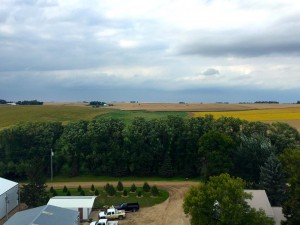 This epiphany I had while terrified at the top of a grain elevator parallels the entirety of my time spent in Iowa. The perspective on farming that I gained from my new vantage point mirrors the perspective I gained on agriculture as a whole during the trip. This visit up north reminded me that agriculture does not end past the Florida border. Agriculture is a global pursuit and we as FFA members are representing all of it. As we continue to advocate for our industry, remember to share the story of American agriculture as a whole, because it is our combined efforts that manage to feed the world.

Our time in Iowa and our trip to the top of the grain elevator are events I won’t soon forget. I’m thankful for these experiences, as they have endowed me with a fresh perspective on American agriculture and a renewed thankfulness for standing on solid ground.