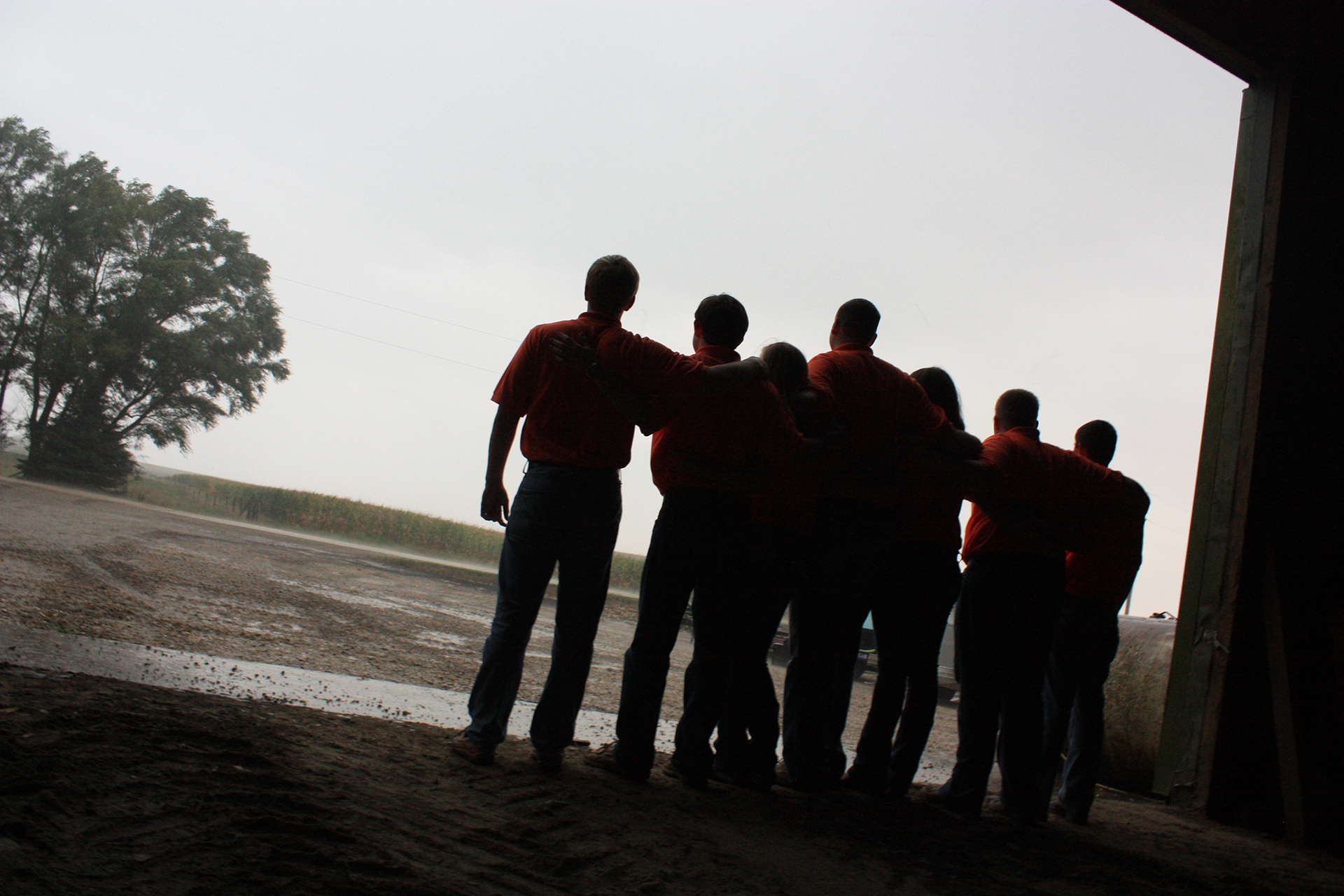 By Florida FFAOctober 21, 2013No Comments

I will never forget that moment, in Tama County, Iowa. I stood there under the barn listening to the rain on the tin roof and watched the corn and the soybeans soak it all up. My mind began to reflect back on all that the state officer team and I had experienced in the past week on our Iowa Pork Tour.

I thought back to our first day of the tour. We came in as empty books, waiting for our pages to be filled with knowledge of the pork industry. We definitely had a full book by the end of our trainings that day; from learning of the efficiency of the pork industry to practicing how to communicate their message.

That knowledge was very useful as we entered the Pioneer seed company and Kinze tractors. As we walked through Pioneers labs and saw where they were developing new seeds, it was crazy to think that we just walked by a product that could be in the fields twelve to fifteen years from now. Then as we walked through the assembly lines at Kinze’s manufacturing plant, we were fascinated with the amount of thought that goes into each step in order to produce the top-notch equipment that farmers need. To see the dedication and commitment to perfection at these two facilities was unreal. It was very reassuring to see that farmers have support groups like Pioneer and Kinze, that work tirelessly to make the farmer’s job just a tad bit easier.

My thoughts then led me back to one of the most impactful tours of the week; Brenneman Pork. You know that when a tour starts off with pork burgers, it is going to be good. Like the burgers, everything else at Mr. Brenneman’s farm was nothing but the best. I could see why he put so much thought into every aspect of his farm after hearing his story. Mr. Brenneman started from nothing. He built his farm up, only to have it torn back down to the point of almost losing it. After taking a second job and working tirelessly to support his family and what was left of his farm, the hard work paid off and he built his farm up to the 600,000 pigs per year that it is at today. “I really hope you have some hard times, cause that’s when you find out who you really are,” said Mr. Brenneman. Those words stuck in my head as I toured his farm and saw the sweat and tears that he put into these pigs. From the ventilation system that he invented in the barns, to the safety precautions that he had all visitors go through; you could really tell how much he cared about the well being of his pigs. Aside from getting to see the baby pigs, perhaps the most eye-opening aspects of that particular tour was getting to see the gestation stalls. In one of the barns, we were able to witness the difference in pig’s behaviors between the ones in the stalls and the ones in the open housing. In the gestation stalls, they had some happy pigs; they got to eat as much as they wanted without having to share or get interrupted. However, the pigs in the open housing were, well… acting like pigs. All you could hear was the sound of the pigs squealing and fighting over food. Although I could not hear anything in that part of the barn, I could for sure smell something. The smell was bad at first, but then I learned that they use all of the pig feces to spray and fertilize the corn, that later comes back to the pigs; so I would say that it was a pretty good smell. This is where the efficiency comes in that I mentioned earlier. Everything about Mr. Brenneman’s farm was impressive, and it is an experience that I will reflect on long past that moment under the barn.

Perhaps the thing we love about the pork industry the most, is getting to eat it; however, that process does not come easy. The JBS processing plant broke that process down for us and let us witness it from start to finish. From the time that the pigs were put to sleep, to the time the cuts of meat were separated, to the time they were put in the freezer; the employees at JBS were committed to doing their individual jobs so that the big picture could come together. Despite having seen the process behind it, we still enjoyed our sausage and bacon pizza to complete the tour. Like I said, eating the pork is what we love the most.

The other highlight of our tour was getting to travel to Mr. Geinger’s farm in Tama County. On his farm we were able to learn more about soybean and corn yields by climbing a hundred feet up in the air on the grain bins. Just kidding, we learned by driving the tractors and combine through the field. All jokes aside, we were taught how to calculate the yields by taking samples from his field and putting our math skills to the test. Mr. Geinger also raises pigs, which we were able to look at. Then the rain spoiled our fun and brought us into that barn where I watched the corn and soybeans grow.

After I pondered back on all of those experiences, I realized how much I take agriculture and the farmers behind it for granted. The effort that they put in every single day should never be overlooked or forgotten. Farmers are truly the wheels that keep our great nation and our world turning.

You remember how I said that we had a full book of knowledge after the trainings on the first day? Well I was wrong. Getting to witness the issues, triumphs, discouragements, and joys first-hand gained us a whole new book full of knowledge on the pork industry and on American agriculture. “Every day I don’t learn something, is a bad day,” wise words from Mr. Brenneman. Well the state officer team and I learned something every day on this tour, so I think Mr. Brenneman would agree when I say, it was a very good week, and I know the other state officers would agree when I say that it is one that we will NEVER forget.